10 September, Brussels – Jean-Claude Juncker has announced the distribution of portfolios to his team of Commissioners, and in so doing has also presented a shake-up in the way that the Commission is to be run, with a streamlined Cabinet and Vice-Presidential ‘Project Leaders’.

The new Commission will contain seven vice-presidents, four of whom will be responsible for steering and co-ordinating Commissioners in Project Teams. The Team for ‘A Resilient Energy Union with a Forward-Looking Climate Change Policy’ will aim to diversify energy sources, reduce import dependency and improve energy efficiency. Alenka Bratušek, outgoing Prime Minister of Slovenia, will be responsible for this priority area as Vice-President for Energy Union. 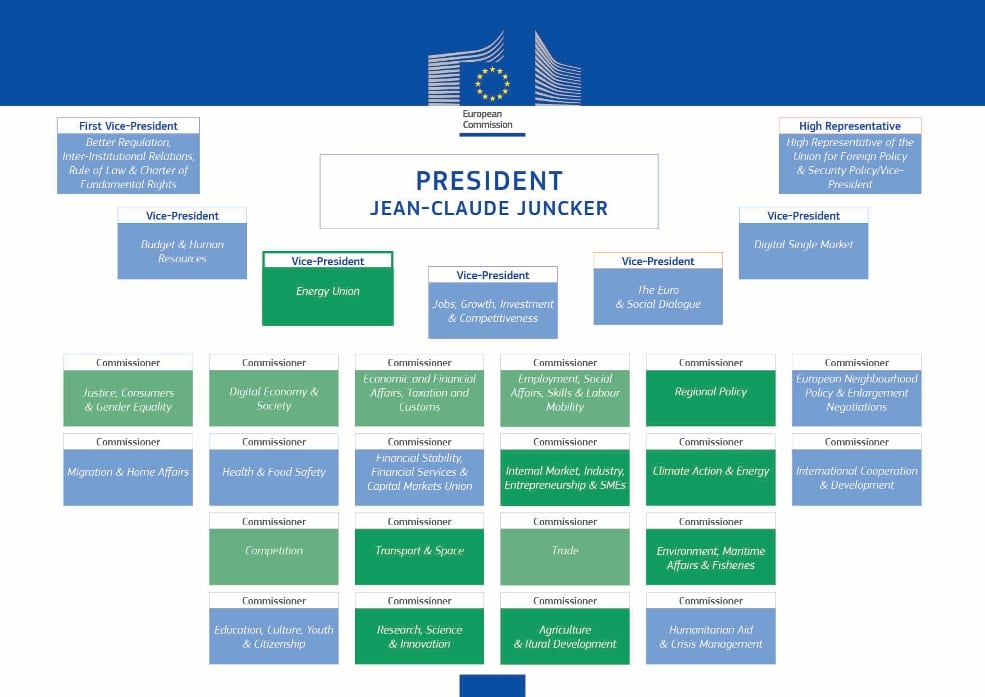 Above: Project Team for Energy Union

On the reshuffle, Juncker explained, “I want to reform and reorganise Europe’s energy policy into a new European Energy Union. We need to pool our resources, combine our infrastructures and unite our negotiating power vis-à-vis third countries. We need to diversify our energy sources, and reduce the high energy dependency of several of our Member States.”

The main actor in the Energy Union team will be Miguel Arias Cañete (former Spanish Minister of Agriculture, Food and Environment) who takes on the newly combined role of Commissioner for Climate Action and Energy. Environmental groups have expressed discomfort a the merging of climate change and energy portfolios, suggesting it is an attempt to avoid a repetition of clashes between DGs Climate Action and Energy in the Barrosso II Commission. Juncker, however, has explained that his motivation was to provide greater co-ordination between these mutually reinforcing areas.

Other changes in the Juncker Commission include:

Click to see a Press Release and a Q&A on the New Commission.

To find out more about Energy priorities of the Juncker Commission, see the Mission Letters from President Juncker to the new Commissioners for Energy Union and Climate Action and Energy.

Council adopts conclusions on Eco-Innovation and the Circular Economy

Brussels – The Council of the European Union, meeting in its Environment (ENVI) configuration, has adopted a new set of conclusions…

Brussels, 9 April – In order to boost the sale of green products in the EU, the European Commission has…