Greenovate! Europe experts provide Exploitation Services for bringing research results to the marketplace, as new products, services, and also as policies. Here you can read about some of our exploitation work in European Union funded research. 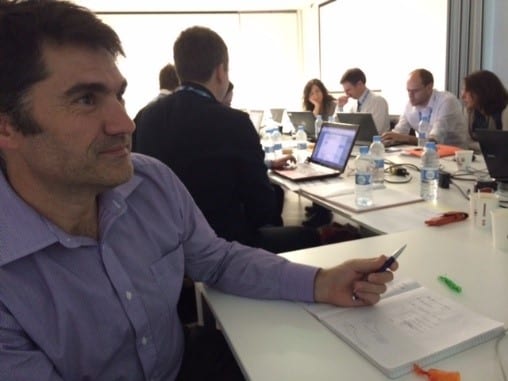 21 October 2015, Madrid – A half-day exploitation workshop was carried out at the second meeting of the ButaNexT project. The project aims to develop highly efficient production processes and convert sustainable feedstocks for the next generation of biobutanol.

The aim of the workshop was to identify, at a very early stage, research results that will be potentially exploitable by the end of the project. C-Tech Innovation, exploitation partner of the consortium, challenged the partners to detect the results that could reach the market in three years’ time. The group then worked together to draft business plans.

This innovative process produced seven draft business plans that will be further developed and updated by the consortium in future workshops.

22 May 2015, Stockholm – Gosse Hiemstra from Van der Meer en Van Tilburg held an interactive exploitation seminar in Stockholm for the members of the SWIP consortium. The Workshop explored the different exploitable results of the project and looked at possible exploitation routes. The consortium divided into groups to consider each of the exploitable results, defining the value, market, delivery route and partners for each. The results will be used to build business plans for the project.

The Greenovate! Europe exploitation experts, Serge Galant and Karine Laffont of Technofi, presented different business models for exploitation of five key results of the project. Project partners have discussed the different exploitation routes, providing valuable input to the final version of the Exploitation Plan. The next step will be to test the proposed business models with potential early adopters. To this end, several stakeholder workshops will be organised in late 2015 and early 2016 to validate the proposed business strategies.

Greenovate! Europe exploitation experts Bob Crawford and John Henderson from C-Tech Innovation kick-started the discussion with a thorough presentation of the market trends and value functions for the new eco-building materials. The exploitation team worked on brainstorming seven business models for each of the expected project results in the areas of insulated wall panels, coatings and insulation material. Based on the rich input received during the workshop, the exploitation experts will produce draft business plans. The next and last Exploitation Workshop is planned to take place in June 2016.

9 February 2015, Copenhagen – The second EuroPruning Exploitation Workshop was hosted by Exploitation Lead, InvestorNet-Gate2Growth – a third party of EuroPruning partner, Greenovate! Europe. The goal of the workshop was to talk through the expectations of post-project commercial exploitation of generated results, and to begin work on drafting mini business plans for the technology producing partners of the project. Alongside these mini plans, an overall exploitation plan for EuroPruning will be created by InvestorNet by the end of the project.

The Workshop took the form of presentations and group discussion, but also parallel one-to-one consultation between the businesses and Gate2Growth consultants, lasting over an hour. The Workshop has brought further clarity to potential business models and post-project exploitation activities.

28 October 2014, Nantes – During a meeting of the whole SWIP consortium, Greenovate! Europe held an exploitation workshop with two of its expert members, to consider the market for small-wind turbines and explore how to exploit the results of the SWIP project. Exploitation lead, Van der Meer en Van Tilburg, led the workshop, with support from CEIS Innovation 128, who were responsible for market analysis and exploration of competing solutions. CEIS presented opportunities in the small wind market, and Van der Meer en Van Tilburg led discussions that set the basis for the future development of project exploitation.

16 May 2014, Munich – At the second meeting of the ETFE-MFM project, which is developing a multifunctional ETFE module for Building Integrated Photovoltaics (BIPV) and facade lighting, a half-day exploitation workshop was hosted by Greenovate! Europe member i.con innovation to begin considerations of the commercial potential of the modules. The workshop identified a number of exploitable results, to be discussed further by the consortium in future workshops. The workshops will lead to the production of Business Plans for use of the project results.